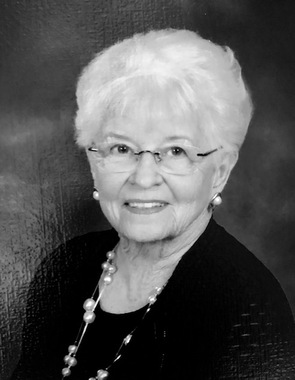 Back to Barbara's story

Barbara Jean (Blair) Wills, 87, passed away peacefully at home with her family by her side on Wednesday, July 3, 2019. Born on January 6, 1932 in Fort Worth, Texas, she is preceded in death by her husband Robert Glover Wills, Jr. and her parents Douglas Walker Blair and Hazel Touchy Fox. She is survived by her children, daughter Rebecca Wills VanderVort and husband Kent, son Robert William Wills and wife Linda, son Randall Douglas Wills and wife Nancy; her grandchildren Samantha Nicole Wills, Morgan Ann Wills, Garrett & Veronica VanderVort, Andrew Schwarz, Chris & Tiffany Morgan, Adam & Brandy Schwarz and her great-grandchildren Broderick VanderVort and Kyleigh & Katie Morgan. She is also survived by her aunt Carol Touchy, cousins Roy Touchy and Nancy Touchy Janse, sister-in-law Betty Morrow, nieces Ann Morrow Sharp, Mandy Holt Sherwin, Jenny Holt, Kathy Schultz Cook and nephews Timothy Morrow and Douglas Schultz, as well as many wonderful friends.
Barbara resided at Elkins Lake in Huntsville, Texas for the past 20 years where she was very active in both the community and her church. She was a devoted wife, mother, grandmother and great-grandmother who is beloved by her family. Raised in Houston, Barbara graduated from Robert E. Lee High School in Baytown, Texas. She married Robert G. Wills, Jr. in 1951. They were married for 50 years and raised their family in Houston, New Orleans and Little Silver, NJ. Returning to Texas in the early 70s, they resided at their Canyon Lake home and traveled the world together until Bob's retirement when they moved to Elkins Lake in Huntsville.
A Memorial Service celebrating her life will be held on Saturday, July 27, 2019 at 11:30 am at the First Presbyterian Church of Huntsville, 1801 19th Street under the direction of the Sam Houston Memorial Funeral Home. In lieu of flowers, donations may be made to the First Presbyterian Church of Huntsville or the charity of your choice. Condolences to the family may be made at www.shmfh.com
Published on July 10, 2019
To plant a tree in memory of Barbara Jean "Blair" Wills, please visit Tribute Store.

Plant a tree in memory
of Barbara

A place to share condolences and memories.
The guestbook expires on October 08, 2019.