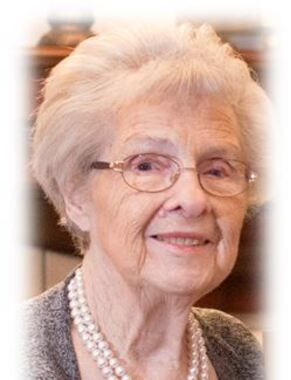 Radelle Crouch Whitt, 89, of Huntsville, TX, passed away peacefully on June 22, 2018, at Huntsville Memorial Hospital, Huntsville, TX.
Radelle, was born on May 4, 1929 and raised in the San Antonio and Houston areas. She was the oldest of Helen Harris' (and stepdad Frank's) children, and as a young girl occasionally traveled for visits with family friends in Sugarland and Huntsville. During these visits she became acquainted with a young man, LeRoy Whitt, who joined the Navy to fight in the Pacific Theater during World War II. LeRoy served his country with honor, swept Radelle off her feet while courting her by mail, and stole her heart. They were married, June 22, 1946, when she was 17 years old.
Radelle lived each day with joy, laughter, kindness, and a zest for life. She was a loving and devoted wife and mother and poured her heart and helping hands into her home, church and community. She served others with a cheerful and giving heart, that flowed from a deep and personal faith. She had a favorite pew at First Assembly of God in Huntsville.
As a mother, Radelle knew joy and loss. Her eldest, Elaine Carol (1947) was her favorite travel buddy; she gave birth to Roy Lee in 1951, who was immediately diagnosed with spina bifida and lived on this earth just two weeks; and Larry Ray (1960), who made her laugh and dreamed of being a radio broadcaster as early as 12 years old. She encouraged and supported each of them, and also her cherished grandchildren.
Radelle's life and legacy was her family - spending time together and always making special memories. Enjoying guitar sing-a-longs, horseshoe games with barbecue, and her fabulous iron skillet cornbread. Life was simple, and life was good. She loved music - from Tony Bennett to Bill Gaither - music spoke to her. She had a way of making everyone feel like a celebrity and bragging on everyone! And, such great chocolate cake!
Over the years, Radelle showed great resilience in overcoming cancer and recovering from 6 heart surgeries, and the death of her beloved husband of 68 years and daughter, in 2015. Even so, she met adversity with faith, grace, and courage. Radelle lead by example. This included deciding it was time to join others in a community called Lexington Assisted Living, where she flourished and often cut calls short to make a social event or bingo game.
On the morning of June 22, 2018, Radelle was reunited with LeRoy Whitt for their 72nd wedding anniversary, a beautiful finish to a tapestry of love - this time united on heavenly ground.
While Radelle's smile and presence will be greatly missed by all who knew her, her love and legacy continue.
Radelle is survived by: Franklin Harris, Merry Lynn Rose, and Jean Kupelian; son, Larry Ray Whitt, 57, and his wife Jennifer Knight Whitt, 56, of Crofton, MD; grandchildren Landon Whitt, Leah Huddleston, and Phyllis Cato ; great grandchildren Calee, CJ, Tori, and Jonathan and Elikai.
The family will receive friends from 5:30 PM till 7:30 PM on Tuesday, June 26, 2018 at Sam Houston Memorial Funeral Home in Huntsville, Texas. Funeral services will be held at 10:00 AM on Wednesday, June 27, 2018 in the chapel of Sam Houston Memorial Funeral Home in Huntsville, Texas. Interment will follow the service at Black Jack Cemetery in Huntsville, Texas.
Full obituary may be viewed and memorial condolences made to the family at www.shmfh.com.
Published on June 26, 2018
To plant a tree in memory of Radelle Whitt, please visit Tribute Store.

Plant a tree in memory
of Radelle

A place to share condolences and memories.
The guestbook expires on September 24, 2018.

Restore the guestbook to view the 1 more posts by family and friends, and share a memory or message of condolence of your own.