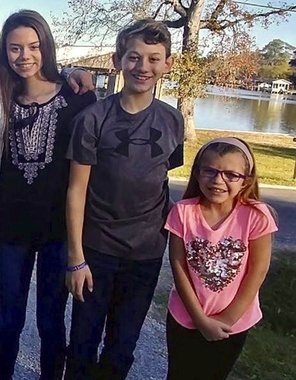 Back to Tiffany, Michael, Danielle's story

All three were very caring, but one special thing they all had in common was their love for hot fries (they would eat them every day if they could)! They loved each other, their siblings, parents, extended family and their friends. They supported each other, cared for one another but would hold each other accountable when they were doing something wrong. They truly had a special bond with each other and their other siblings, which will never be broken.

Tiffany was part of the National Honor Society and was in the top 10% of her class, was part of Key Club, and also worked on the yearbook in editing and design. Though she was quiet, you could tell there was so much more behind her smile, and she was just starting to come out of her shell. However, to those who knew her well, she was witty, super funny, smart, and goofy all at the same time. Her and her sister Samantha (Sam) were best friends. She loved watching You Tube videos and was an animal lover, with a special fondness for horses.

Michael (Mikey) loved his video games, especially Fortnite, and this allowed him to be himself, showing his confidence more readily online than face to face. He took martial arts, specifically Kung Fu and had received his blue belt. At the same time, he loved being outside, playing with the neighborhood friends, and riding his dirt bike. He especially loved his dog Boo. He was known for being very patient and kind, and though he didn't talk much, when he did, he had a twinkle in his eye and a grin on his face with a cute little crooked smile.

Danielle (Dani) was a part of her school band and had just started playing the trumpet. She also had been taking Hip Hop classes at the MC Dance Studio. Her goal was to become a member of the GG team like her big sister Sam; this is where her sassiness and confidence really shined through. One of her favorite things to do was to hang out with her friend Clarissa who she had sleepovers with almost every weekend. She was very nurturing and protective toward her nephew Jaxon, creating a special bond between them. With a heart bigger than her body, she wanted to grow up and work with special needs children. This was a strong desire of hers, as she had Noonan Syndrome. She wasn't going to let her disability keep her from reaching her dreams.

The celebration of their lives will be Wednesday, April 10, 2019 at Northside Baptist Church at 10am, with a viewing on Tuesday, April 9, 2019 from 4:00- 8:00pm. Interment immediately following the service at Mayes Addition of Oakwood Cemetery.

Those wishing to leave memorial condolences for the family may do so at www.shmfh.com.
Published on April 8, 2019
To plant a tree in memory of Tiffany, Michael, Danielle Williams, please visit Tribute Store.

Plant a tree in memory
of Tiffany, Michael, Danielle

A place to share condolences and memories.
The guestbook expires on July 07, 2019.